There is something in me today

that wants to run.

I want to run

through the wind-swept grass

in the back corner pasture,

and along steady cow paths

I want to run

gulls crying from the air,

a cheerful chill to the spine.

Today I sit in a chair in Kentucky

Chairs can not hold me today. 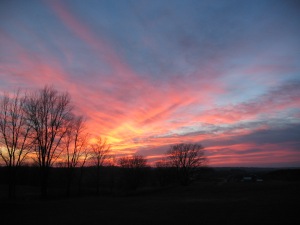 The sun was just starting to melt away the early morning chill as we turned down the steep mountainside driveway sprinkled with gravel.  We parked our three white trucks all lined up in a row.  All three counties’ housing crews had found themselves short-handed that day, so we gathered as one – Jackson, McCreary, and Rockcastle – to build a deck together.

I soon discovered that this was not going to be the typical deck that I was used to building.  Rail-free and shaking in its posts, the pre-existing deck stood above my head, as the earth rapidly descended from the side of the trailer.   Our first task before building a new one would be, of course, to tear this one down.

It came down with a limited fight.  Most of its feet, after all, were not actually planted in the ground.  We piled the aging boards to the side and prepared to put in the new.

Ahh, the joys of posthole digging and making it square.

Is that board heavy?  Well, it’s a good thing that we have more than one shoulder to prop it up on.

Missing some materials?  Well, it’s a good thing that we have enough people that someone can run to the hardware store while the rest of us keep working.

As we progressed with our morning work, two little blonde-headed boys emerged from the house.  They stood in silence and watched us.  The youngest soon went back into the house, but his older brother stuck around, pulling a wagon behind him.  The wheel fell off at one point, and he took out his housing repair tools (a hammer, good for many uses), flipped the wagon, and displayed his own repair skills.  When prompted for his name by more than one of us, he just smiled and shook his head.  I smiled to myself and let him be.  I, after all, had been a quiet observer once upon a time.

We all gathered and sat beneath the shade, chatting over bologna sandwiches, cold leftovers, and protein shakes.  A crunch coming from the carport revealed our blonde-headed little friend, stepping quietly up behind us to listen to our talk.

The little boy smiled and shook his head to each.

We went back to work, but this time, he joined us.  And he slowly started to talk.

He has his own hard hat, and his own hammer, and he put them to work.  His name is David.  Janean helped him up onto the tall new deck floor that we had put together and he helped us put up the railing, handing new spindles to us and manning the level.

3:30 rolled around, which marked the arrival of the school bus.  Three more blonde-headed boys jumped off of it, and came around to the back of the house to check things out.  Soon, they took an interest in helping out too, trading off with the spindle duties and fetching batteries.  I found myself quite surrounded by a gaggle of youthful helpers.

The decking built, the stairs put in, and the railing 3/4 of the way finished, the day came to an end.  There’s a lot that three counties and five pairs of little hands can get done.

I guess what they say is true:

The shadows of the crowds darted through headlights in a scatterbrained makeshift parking lot dotted with trees and bushes and games of disc golf waiting to be played.

They wandered across the road and tumbled into the grass to the tune of “Doing it our way.”  Laverne and Shirley marched from a Milwaukee sidewalk to a Berea schoolyard.

The balloons, buoyant with air, sat in a circle in their midst, flickering with fire and lighting the night sky.  Bright colors, stripes, and advertisements emblazoned on canvas and floating above baskets.

Parents rested on blankets beneath these glowing celebrations of life while their children ran around in circles, glow sticks perched on tousled heads and waved in delightfully dirty hands.   Bright bits of glow joyously flew beneath their larger and more colorful counterparts.

Meanwhile, she sat in the grass next to me and let the silent tears fall.  Tears that could no longer be blinked back.

There is heartache and sorrow to be found even in the beautiful moments.

And I saw them there that day.  A juxtaposition of glow stick children filled with life and a girl mourning the loss of one who died too soon.